The CMA History of Service

In 1994, Bill C., a recovering crystal meth addict 16 years sober in A.A. and the founding father of CMA, observed a growing number of other crystal meth addicts attending various twelve-step meetings in Los Angeles. Bill recalled that many of the secretaries of these meetings did not like the shares of the crystal meth addicts and were therefore reluctant to call on them in meetings. Bill maintained that there ought to be a place for these people to share. 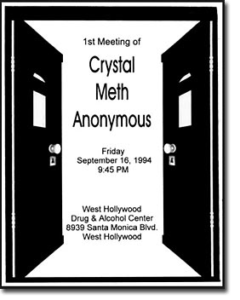 Though the program of recovery as outlined in the Twelve Steps would clearly work for crystal meth addicts, the other meetings’ singleness of purpose meant that many who exclusively used crystal felt uncomfortable participating fully in these meetings and fellowships. Bill believed that these people would benefit from a special-purpose meeting for those recovering from addiction to crystal meth.

From this idea the fellowship of Crystal Meth Anonymous was born.

Attended by 13 people, the first meeting of Crystal Meth Anonymous was held September 16th, 1994, @ 9:45 pm at the West Hollywood Alcohol and Drug Center in West Hollywood, California. The speaker at that meeting was Don N. (who, by no coincidence, returned as the keynote speaker fourteen years later in 2008 at CMA’s first General Services Conference at Park City, Utah ).  Many of those original members who attended that first meeting–Nina, Eli, Pete S., Michael, Rick and others–and stayed clean and sober, remaining active in the fellowship for life. Members of that meeting quickly started other meetings, and within a few months there were meetings daily in Los Angeles.

The early CMA meetings based their readings and program of recovery on that of AA and also of NA. Members of the fellowship worked the Steps, referring to literature and materials borrowed from AA, NA and CA. To this day such diversity has endured in the fellowship nationwide, as members refer to the experience embodied in the literature of other fellowships for guidance on working their program of recovery.

Members of CMA in Los Angeles helped start meetings in San Francisco and San Diego. Meetings also sprang up in Salt Lake City, New York City and Phoenix in 1998. By 2001, CMA meetings had begun in Atlanta, Georgia, and soon thereafter meetings followed in many other parts of the country.

In 1997, the seven Los Angeles meetings formed a committee and began the process of legal incorporation as a California non-profit corporation. Aware that these seven meetings could not claim spiritual authority to speak on behalf of the meetings developing throughout the country, they called this committee the General Services Committee (rather than World Services). They also developed a new-meeting packet to help people start CMA meetings in other parts of the country. Initially sent via postal mail upon a written or phoned request, then made available for online download the fellowship began to grow explosively.

In 2002, the IRS extended tax exempt status to Crystal Meth Anonymous as a 501(c)3 public benefit corporation. With the recognition of CMA’s non-profit status, the original general services group in Los Angeles began seeking ways to open the collective voice of the fellowship to participation from groups worldwide. An advisory committee, the “Structural Reorganization Committee”, formed to study the service structures of other fellowships, contacts groups around the country for their input, and eventually proposes that CMA’s bylaws be changed and a new service structure be developed.

In an effort to align CMA’s GSC with the diversity and reach of the fellowship, a complete revision of CMA’s bylaws began in 2004, culminating in ratification in February 2006. Significantly, these bylaws endowed CMA with a Board of Trustees comprised of members of the fellowship from around the country.

The Fellowship of CMA Grows

In October of 2008, nearly 200 delegates, trustees, committee members and members of the fellowship gathered in Park City, Utah, for the first General Service Conference. A conference charter was ratified. The 12 Concepts for CMA World Service were adopted. Many issues were brought to discussion, and many found resolution. One memorable example follows:

For the past few years a discussion existed: “Is CMA a fellowship or a program?” At the first General Service Conference, the following statement was adopted;

Currently, our General Service web site lists 821 meetings many states and provinces and throughout 11 countries around the world.